Radiation is used in specific areas to destroy cancer cells so they will not continue to spread. Unlike chemotherapy, which is a systemic (affects the whole body) therapy, radiation therapy is a localized therapy meaning that it only treats the area of the body where the cancer is located. Radiation treatment is frequently used in addition to surgery or chemotherapy, and is usually applied in lymphoma through external high-energy ray beam or radioactive isotopes. Not all types of lymphoma respond to radiation treatment, therefore it will be up to your healthcare professional to determine if radiation is appropriate in your situation.

External radiation treatment is similar to having an x-ray. The treatment appointment usually lasts several minutes, and in lymphoma a complete course of treatment is typically five days a week for four to five weeks in an outpatient setting depending on the cancer size, type and location.

As with all treatments, side effects vary from patient to patient and depend upon the part of the body treated and the amount of radiation used.

How does Radiation Therapy Work?

Radiation therapy (also called radiation or radiotherapy) uses high-energy x-rays to kill cancer cells. The x-rays cause damage to the cell’s DNA (the genetic material of the cell) which makes it impossible for the cancer cell to repair itself, ultimately causing the cell to die. The radiation does not decipher between cancerous and non-cancerous cells and, therefore, healthy cells in the area will be killed off as well. Care is always taken to plan the treatment properly and ensure that other areas of the body are affected as little as possible. Normal cells affected by the radiation have a greater capacity to heal themselves than the lymphoma cells.

How is Radiation Therapy Given?

A radiation field is the area of the body marked to receive the radiation therapy. To clearly outline the radiation field the skin is marked with tiny ink dots called tattoos. This ensures that the appropriate area is targeted for the radiation and that the exact same area is treated each time. Radiation is usually confined to lymph nodes or the area immediately surrounding the lymph nodes. The radiation field is different in each person and depends on many factors including the type of lymphoma and the extent of the disease. Healthy areas are shielded from the radiation with lead shields similar to the ones you wear at the dentist when receiving an x-ray. Lead blocks the path of any stray radiation beams and prevents them from affecting the DNA of normal cells. 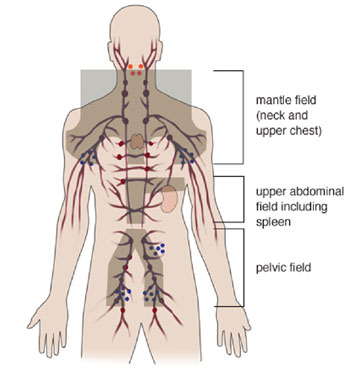 At the beginning of your treatment you may attend a session called planning. You will be in a room with a technician, a nurse and one or two doctors. Other than the fact that there will be no radioactive source in the room, the planning session will be very similar to what will happen when you receive your radiation therapy. For this reason it is often called a simulation.

Prior to the radiation treatment, you will be carefully positioned on a treatment table, with the parts of the body not being treated protected. You must lie completely still during the treatment. Often a mould is created or certain props such as pillows or rolled blankets are used to minimize movement. Above the treatment table is the large machine which delivers the radiation. The actual treatment lasts only for a few minutes and causes no pain or discomfort.

Radiation therapy is most often given on an outpatient basis. You may have to visit the hospital as many as five times per week during a course of radiation therapy. The total dose deemed appropriate for you is divided up and given over a period of one to six weeks. Each dose of radiation is called a fraction and the radiation oncologist prescribes a total number of fractions for your specific treatment.