What is the Lymphatic System?

The lymphatic system is one of the most important parts of the immune system, protecting the body from disease and infection. It is a system of vessels, nodes and organs that branch into all parts of the body carrying lymph, a watery fluid that contains lymphocytes. It often seems mysterious and elusive as it does not receive the same attention as other body systems, like the cardiovascular or digestive systems. Individuals may be aware of lymph nodes in the neck when they become swollen with a sore throat or infection. 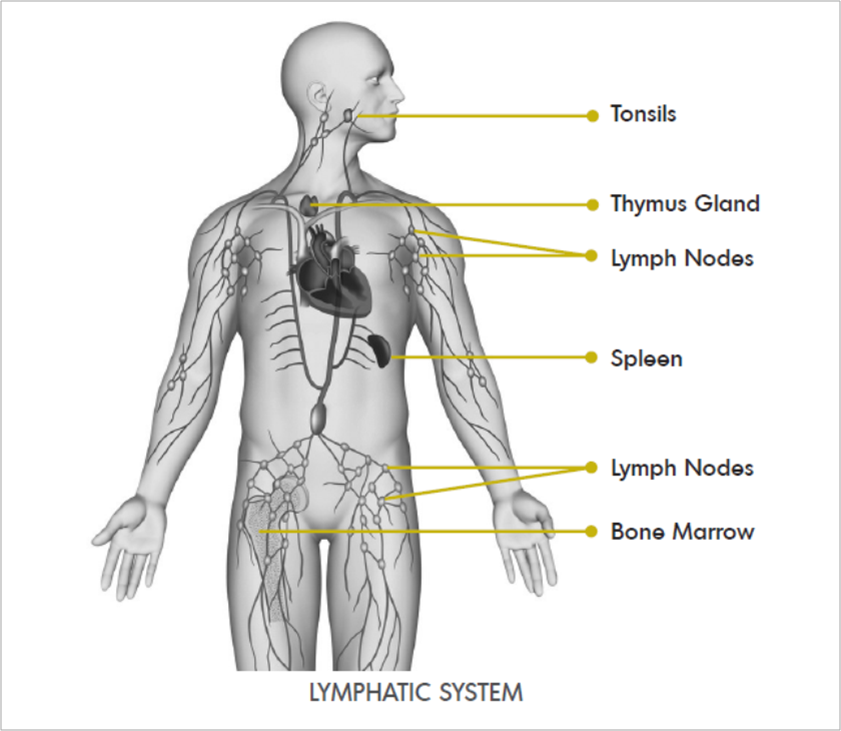 Lymph nodes act as the filter for the lymph fluid and lymphocytes, removing bacteria, viruses and other foreign substances. Hundreds of nodes are found in almost all places in the body, including the elbows, groin, neck and armpits.

If a large number of bacteria are filtered though a node or series of nodes, like when you have a throat infection, they may swell and become tender to the touch. Most swollen nodes are just that: the immune system’s reaction to infection, not cancer.

Cancer occurs when abnormal cells cannot be controlled and continue to grow and multiply. 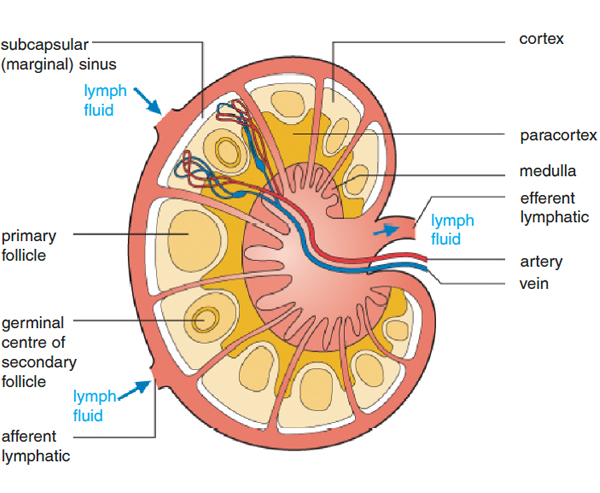 Organs (other than lymph nodes) also considered part of the lymphatic system include:

Lymphocytes are a type of white blood cell, help the body fight infection and are a major component of the lymphatic system. They develop in the thymus and bone marrow and are carried throughout the body by means of the bloodstream and lymphatic system.

Lymphocytes can be found in the blood. However, the great majority of them are normally circulating within the lymphatic system. Lymphocytes are divided into two types: B- or T-lymphocytes (also called B- or T-cells), and function to fight infection and prevent disease. They are an integral part of a healthy immune system. Normally functioning B-lymphocytes transform into highly specialized cells called plasma cells in the face of infection. Plasma cells manufacture antibodies which function to fight infections and react with toxins, bacteria and some cancer cells. The body can then identify and remove these unwanted substances. However, some invaders can evade B-lymphocytes by growing inside the body’s cells. That is where T-lymphocytes come in. T-lymphocytes directly attack foreign invaders such as bacteria and viruses, and also kill cancer cells and rid them from the body.

After an invader has been destroyed, surviving B-lymphocytes and T-lymphocytes develop into specialized memory cells that remain on watch in the lymph nodes, poised to attack if a certain antigen is encountered again. These special memory cells can be thought of as guards that are always on the lookout to prevent specific invaders from controlling the body.

How Does the Lymphatic System Work?

2. To absorb fats from the digestive system:
Special lymph vessels, called lacteals, are located in the lining of the digestive system where they are responsible for absorbing fat and fat-soluble vitamins from food. The fats are then transported to the bloodstream and used as needed.