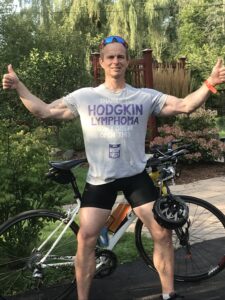 On an unknown date in March 2019, I woke up in the middle of the night wearing a sweat drenched shirt and in agony with severe hip, hamstring and lower back pain which lasted for about 90 minutes. I thought I had overdone it at work or had been working out too hard the previous day. Maybe I was getting older and developing sciatica? This occurred on and off for several months, during which time I started to notice some general malaise, and low grade fevers during the day. I didn’t think anything was seriously wrong with me since I had an annual physical in February. Looking back on the blood work from that physical, I noticed that my lymphocyte number was .9, which is below normal, but since my physician didn’t say anything, I wasn’t concerned about being seriously ill.

After a few months of these symptoms I booked another Dr’s visit. More blood work, an Xray, an MRI, and a referral to a rheumatologist were all ordered. The rheumatologist suggested I might have polymalagia rheumatica (PMR), but ordered a CT scan as well as further blood tests prior to making a diagnosis. A short while after the CT scan was performed, I was contacted by the Lung Clinic in St. Catharines and instructed to book an appointment. The thoracic surgeon shared the unclear results and ordered an EBUS procedure as there was swelling in the mediastinal area. On November 27, 2019 I drove to Hamilton and received a diagnosis of HL. As an extremely fit and healthy 53 year old (ultramarathon, 1/2 iron, two bodybuilding shows, 200 pull-ups in an hour), I was shocked. I could barely utter the words to my wife as tears streamed down my face. We were so sure that there was nothing serious that she waited in the car as I went into the appointment.

On January 9, 2020 I received my first infusion of ABVD to fight stage 4b multicellular HL. I finished chemotherapy on June 11. I have completed some challenging things in life, or what I previously thought were challenging. The ‘dark tunnel’ I experienced during some weeks of treatment was unnerving. I began to understand what it meant to be a “Cancer Warrior”. Six months later I banged the gong at the Walker Family Cancer Center (WFCC) and exited as #2661; it was a great day! As if Cancer, and chemo aren’t tough enough, I journeyed to each treatment during a pandemic and my wife stayed home as visitors were prohibited. In February, after watching international news about Covid19, I began wearing a mask and a shield at treatments which earned me many strange looks. Not too soon after all staff were wearing masks, and shields if pushing drugs in the PICC line.

Just yesterday, August 21 I had my follow-up PET scan, and after the great results of my recent CT scan, am optimistic about receiving fantastic news later this week. Except for some regular side effects, such as peripheral neuropathy, I feel good physically most of the time. The challenge now is the emotional havoc I am experiencing as I attempt to ‘re-start’ my life; living life not fearing death or sickness. It seems I have shifted from being a ‘physical warrior’ to being an ’emotional warrior’ battling the daily range of emotions I am struggling with.

I rise each day with a singular focus of re-claiming my life. I am not sure how long it will take, but I will continue to ‘soldier on’ as a ‘Cancer Warrior’. Whether I ever go back to work doesn’t matter. Besides loving my family and friends, all I want to do is support Lymphoma causes, the Walker Family Cancer Center, Cancer, and most importantly; anyone that is impacted by this disease. I began my first fundraising effort by creating ‘Ashwood’s Army #2661’ for the Big Move big ride to support the WFCC. It feels so great to be giving back to the facility that took such great care of me.

This journey has reinforced something I have always known but not easily accepted, that is, there are no certainties in life. What I do know is certain, I am not the same person I was before this journey started.

I look forward to being a part of Lymphoma Canada.
Respectfully,
John 2.0