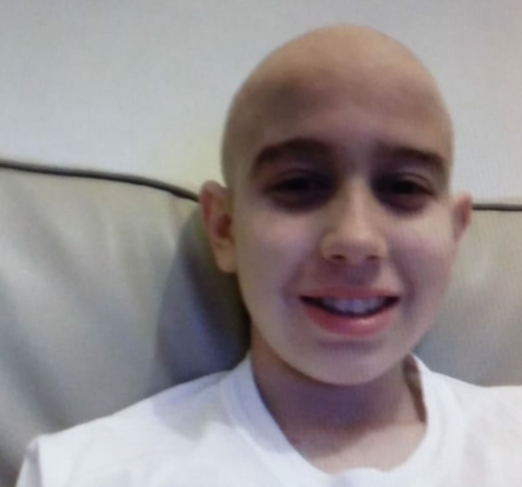 I was a healthy child who had never been sick for anything severe, and I was raised with a lot of love and affection by my parents and all my family. Suddenly, in the year 2008, I started to feel a lot of pain in my legs and back, something strange for a 12 year old boy. I began to make me limp and lose several nights of sleep. At the time, my mother took me to several doctors, but they all underestimated the problem and said it was a growing pain, normal for my age.

In October 2008, my mother saw her son taking several desperate pills to get better, so she insisted to a doctor to do a computerized tomography. That is when it all started. That same week, the result came out, we went to the hospital and the doctor called only my mother to talk. As soon as I entered the room, I noticed her crying and it was at that moment that I realized that everything would start. The doctor told me that he diagnosed me with cancer of the L5 vertebra and he suggested to my mother that we had to go quickly to do a biopsy. I was in shock, but I had a lot of faith and I would not give up. A biopsy confirmed my diagnosis: aggressive diffuse large Bcell lymphoma, a type of non soon I was implanted with a port cath Hodgkin’s lymphoma, and catheter to contain possible difficulties of venous access during the treatment that was to come. Even so, my motto was: “This is just a phase and I will go through it with a lot of faith.”

After much research by doctors specialized in this type of cancer, I began my treatment with the oncologist Dr. Flavio Luisi in a clinic associated with the Support Group for Teenagers and Children with Cancer (Graac). Gradually, this place became my second home, but it was enjoyable, and they gave me an exceptional treatment, with a lot of attention and affection. Because it was a very difficult place to access and because of the type of cancer I had, surgery was not an option. My treatment plan included chemotherapy called REPOCH, and because it was aggressive cancer, every Monday at 6 pm I had a lumbar puncture for local chemotherapy, it was very severe pain, but always came out stronger than I went in.

Every time I came out of another chemotherapy session, I knew I was one step closer to being healed. Most of the side effects occurred when I was at home. During this period, I had fever, tiredness, nausea, body aches, I became very swollen because of the corticosteroids and ended up having to have blood transfusions, but the most complicated moment was to see my hair falling out. During this period, I could not go to school much, but when I went, I suffered bullying and many schoolmates did not want to have lunch with me during recess because they thought cancer would somehow be contagious and spreading. Besides, they wanted me to fail that year, but I did not give up and even with all the problems that I had, I studied alone during the chemotherapy sessions.

I completed my treatment in November 2009. And it was one of the happiest moments for me and my family to hear that I was healed! From then on, my curiosity to know how those drugs healed me, motivated me to go to the pharmacy/biochemistry college, do internships in oncology, manufacturing of oncological drugs, master’s degree, and today I work as a researcher in the sector of research & development of drugs, including oncological follow pharmaceutical industry here in Brazil. up in and I can say with great joy in my heart, that going through this disease made me discover my life purpose which is to help the patients. I wake up every day very happy and go to work knowing that I can save lives with the medicines that I develop.

In this year of pandemic, I never forget what I went through. I have learned that one of the best tools to fight against unexpected moments is to stand firm and have faith! What I was able to learn from my life lesson: Value your family and friends because they can help you overcome anything. Have faith during difficult moments. Be optimistic and have hope. Be grateful. Complain less. Live every moment of your life. Know that there is a big difference between looking at the difficulty as a step and looking at it as a conclusion. This is where faith and courage come in. Only those who have been through it all, it is in the crisis that we get stronger, keeping in mind that their outer world is a simple reflection of their inner world. If you want to make a permanent change, redirect the focus: from the size of your problems to the size of your person. Be Strong!